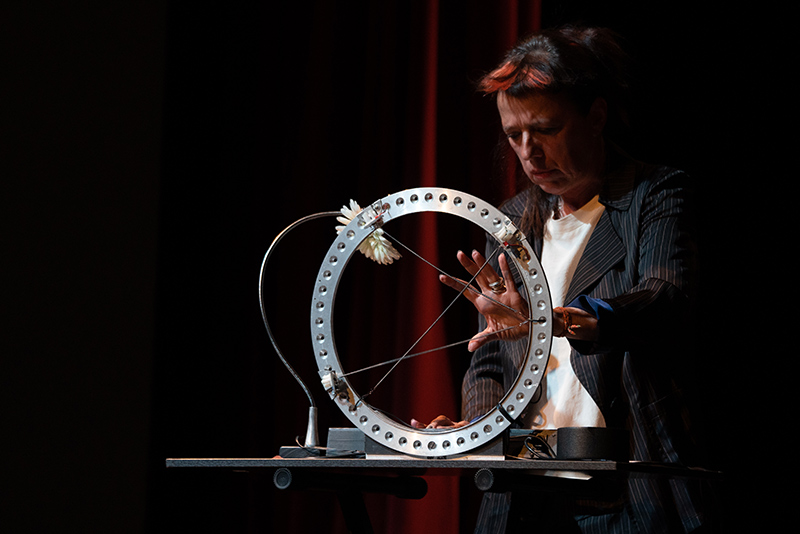 Mills Music Now
Presented by the Mills College at Northeastern University Music Department and the Center for Contemporary Music.

This event is free and open to the public, both in-person at the Jeannik Méquet Littlefield Concert Hall and via livestream on performingarts.mills.edu.

Registration is required. Livestream link will be provided on the day of the concert.

SPARROWS and ORTOLANS
James Fei and Laetitia Sonami started their improvisational collaboration in 2013. While the materials and techniques used by the two musicians differ significantly, both employ tactile interface coupled with electronic systems that exhibit complex behaviors. Sonami performs with her most recent instrument, the Spring Spyre. Constructed around a web of springs whose signals are analyzed through neural networks which in turn control the audio synthesis in real time, the Spring Spyre can exhibit a wide range of sonic behaviors depending on its training terrains. Fei's setup consists of analog circuits driven by multiple feedback loops, often on the brink of instability. Signals are recursively routed through microphones, spring reverb, and converted between audio and control voltages. Circuit elements are also modified by touch, integrating the non-­-linearities and the immediacy of the body with the electronic processes.

Laetitia Sonami is a sound artist, performer and composer. Sonami's sound performances, live-film collaborations and sound installations focus on issues of presence and participation. A pioneer in wearable technology, she created the lady’s glove in 1991 and performed world-wide with this unique instrument for 25 years. She has since been applying machine learning to real time audio synthesis with her most recent instrument, the Spring Spyre.

Paul DeMarinis has been making noises with wires, batteries and household appliances since the age of four. His works combine interactive software, synthetic speech and noise with obsolete or impossible media. He has exhibited and performed throughout North America, Europe, Australia and Asia. His audio works are available from Lovely Music, Black Truffle Records and on his Bandcamp site.

SUE-C (Sue Slagle) is an award-winning artist, engineer and educator whose work in “real time cinema” presents a new, imaginative perspective on live performance. Her performances blend cinema and technology into an organic, improvisational and immersive act, created from live cameras, light pads and video algorithms. She has always pushed the boundaries of human-computer interaction, employing emerging technologies and inventing many of her own, both through performance and tinkering with hundreds of students in her well-established teaching practice.

James Fei (b. Taipei, Taiwan) is a composer, saxophonist and electronic musician. Works by Fei have been performed by the BBC Scottish Symphony Orchestra, Orchestra of the S.E.M. Ensemble, Bang on a Can All-Stars, MATA Micro Orchestra and Noord-Hollands Philharmonisch Orkest. Recordings can be found on Leo Records, Improvised Music from Japan, CRI, Krabbesholm and Organized Sound. Compositions for Fei's own ensemble of four alto saxophones focus on physical processes of saliva, fatigue, reeds crippled by cuts and the threshold of audible sound production, while his sound installations and performance on live electronics often focus on electronic and acoustic feedback. Fei received the Grants for Artists Award from the Foundation for Contemporary Arts in 2014 and he is president of Anthony Braxton's Tri-Centric Foundation. Fei has taught at Mills College in Oakland since 2006, where he is Professor of Electronic Arts and Director of the Center for Contemporary Music.