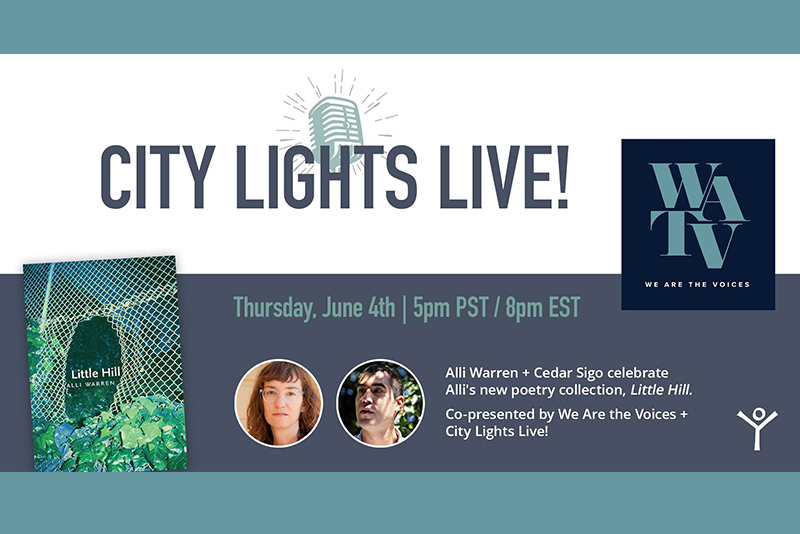 The third full-length collection from Bay Area poet Alli Warren, Little Hill comprises seven long poems written with propulsive prosody in a daybook fashion, examining our present, politically charged moment. These poems are at once energetic and contemplative, intimate and direct, as Warren focuses her attention on capitalism, gender, love, inequality, and resistance. Despite the dystopian now, Warren finds promise in the smallest human instances of tenderness, ecological connection, and political solidarity. Little Hill is about learning to live and love in the 21st century while not shying away from all there is to struggle against.

"Little Hill is gift more than condemnation, though as the latter it's unsparing. Still, it's a gift."––Alice Notley

"Alli Warren keeps company with those rare poets whose every new book is their best."––CAConrad

"Little Hill embodies a poetics of radical uncertainty, one that attends to its horrific condition of possibility and is produced through the unmooring catastrophes that define our present moment: the destruction of the earth, mass imprisonment, late-capitalism—the litany does not end there. . . . Yet yearning, even as it is raised tentatively, is not crushed. In and against it all, a question is raised—the question of what it means to love in times of terror."—Jackie Wang, author of Carceral Capitalism

Alli Warren published her Poetry Center Book Award-winning debut, Here Come the Warm Jets, with City Lights in 2013. She is also the author of I Love It Though (Nightboat Books, 2017), as well as numerous chapbooks. She has edited the literary magazine Dreamboat, co-curated the (New) Reading Series at 21 Grand, co-edited the Poetic Labor Project, and contributed to SFMOMA's Open Space. Her writing has appeared in numerous publications, including Harpers, Poetry, The Brooklyn Rail, Best American Experimental Poetry, and BOMB. She has lived and worked in the Bay Area since 2005.

Cedar Sigo was raised on the Suquamish Reservation in the Pacific Northwest and studied at The Jack Kerouac School of Disembodied Poetics at the Naropa Institute. He is the editor of There You Are: Interviews, Journals, and Ephemera, on Joanne Kyger (Wave Books, 2017), and author of eight books and pamphlets of poetry, including Royals (Wave Books, 2017), Language Arts (Wave Books, 2014), Stranger in Town (City Lights, 2010), Expensive Magic (House Press, 2008), and two editions of Selected Writings (Ugly Duckling Presse, 2003 and 2005). He has taught workshops at St. Mary’s College, Naropa University, and University Press Books.

About We Are the Voices: Through a generous grant from the Andrew W. Mellon Foundation, this project connects Mills College students with local and national poets, performers, writers, and scholars to collaborate around transformative art and critical scholarship.

Led by Mills Professor Sheila Lloyd, We Are the Voices We Have Been Waiting For: Poetry, Performance, and Public Humanities is a five-year, multi-pronged project that brings visiting artists and scholars to campus, broadening the conversation for Mills students and building connections with our local community.