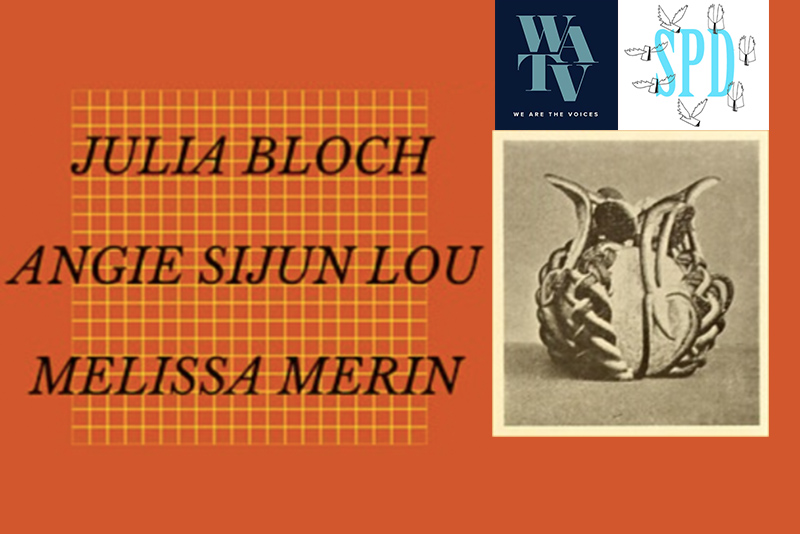 Presented by We Are The Voices

Bay Area Bookseller Voices and SPD Presents invite you to a night of readings with:

Free event, to be hosted on ZOOM, with a link distributed to all ticket holders.

Julia Bloch grew up in Northern California and Sydney, Australia. She is the author of three books of poetry: Letters to Kelly Clarkson, a finalist for the Lambda Literary Award; Valley Fever; and The Sacramento of Desire, released in 2020 from Sidebrow Books. She is a Pew Fellow in the Arts and lives in Philadelphia.

Angie Sijun Lou is from Seattle and Shanghai. Her work has appeared, or is forthcoming, in the American Poetry Review, FENCE, Black Warrior Review, the Adroit Journal, the Asian American Literary Review, Hyphen, the Margins, and others. She is a Kundiman Fellow in Fiction, a PhD student in Literature and Creative Writing at the University of California, Santa Cruz, and a calculus instructor at San Quentin State Prison.

Melissa Merin has been writing since she could hold a crayon. She is established as a parent, a lover & partner, a queer, an anti-authoritarian and a consistently retiring punker. She is too Black to ever be considered a snowflake. Melissa believes in utilizing a diversity of tactics to build the world we need; one of her favorite tactics is writing. Melissa is a long-time educator and agitator and has never been able to get it together to “publish” her poetry, though, though many zines and many blogs tell the story of trying. Melissa has the distinction of being one of a few Black cis-women of her generation to not love Beyonce or Oprah.

We Are The Voices is able to support this event through a generous grant from the Andrew W. Mellon Foundation, this project connects Mills College students with local and national poets, performers, writers, and scholars to collaborate around transformative art and critical scholarship.

Led by Mills Professor Sheila Lloyd, We Are the Voices We Have Been Waiting For: Poetry, Performance, and Public Humanities is a five-year, multi-pronged project that brings visiting artists and scholars to campus, broadening the conversation for Mills students and building connections with our local community.

In an increasingly corporatized book industry, Small Press Distribution (SPD) brings readers independently published literature, emphasizing small press values--equity, experimentation, and access. We connect underrepresented literary communities to the marketplace and to each other via book distribution, events, and public advocacy. Prioritizing artistic and activist visions, SPD’s nearly 400 presses publish a full diversity of writers who rely on us to reach readers nationwide.

Check out our FB Event Page.