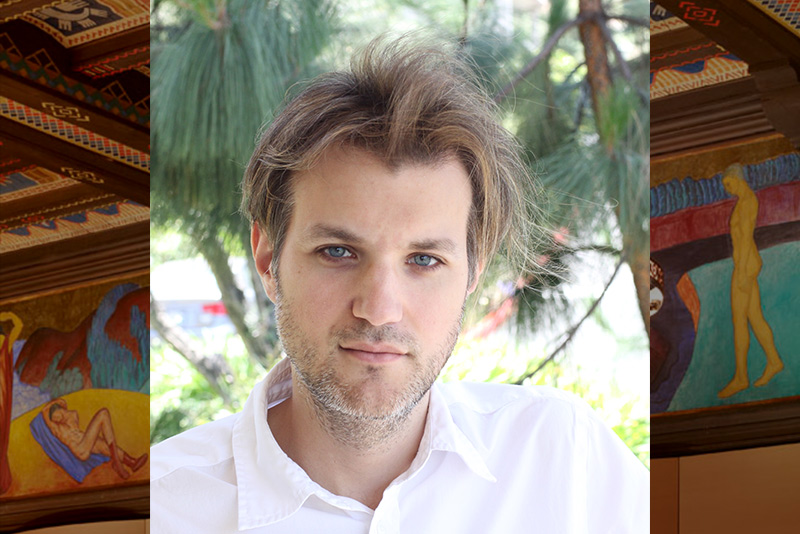 This event open to the public.
Registration is required.

As a performer, Tellef Johnson specializes in virtuoso music of the 19th and 20th century, focusing on those in the composer-pianist tradition such as Liszt, Scriabin, Balakirev, Alkan and Rachmaninoff, as well as those who have been unknown or marginalized in their time, such as Kaikhosru Shapurji Sorabji (1892-1988), whose eight-hour Piano Sonata V: Opus Archimagicum will be released this year by Johnson on 9 compact discs.

Tellef made his New York debut at the age of 21 playing Sorabji's 50-minute Second Piano Sonata at Merkin Concert Hall which was subsequently released on compact disc to much acclaim. The same year he gave the U.S. premiere of György Kurtág's piano concerto, Quasi Una Fantasia, conducted by Alan Pierson. His performances have been broadcast throughout the world and on New York Public Radio. Among the artists Johnson has worked and collaborated with include John Corigliano, David Dubal, Alan Feinberg, Paul Haas, Gilbert Kalish, Garrison Keillor, Kurt Masur, Sylvia McNair, Brian Mulligan and David Del Tredici, whose piano composition Arm Candy is dedicated to him. Tellef collaborated with filmmakers Ismail Merchant and James Ivory through a piano recital with the Merchant Ivory Foundation to raise funds for film preservation. He has worked with Pakistani singer Sana Illahe on ragas and the Hindustani classical music tradition, yielding a new composition this year, the hour-long Raag "Gehra", which will soon be commercially available.

As a composer, Tellef has received many accolades and honors, notably the $44,000 Archibald Bush Fellowship, a Leonard Bernstein Fellowship from the Tanglewood Music Center, and a commission from the New Juilliard Ensemble for his Chamber Symphony, described by the New York Times as "...the most immediately appealing of the concert... with electronic sounds suffused in painterly tones." Johnson's new composition, Etudes for piano, will be released this year in three volumes accompanied by a recording by the composer. His piano arrangement of John Corigliano's opera Ghosts of Versailles was published by G. Schirmer as an epic piano-vocal score.

Tellef has also been active as a film director and screenwriter. His award-winning short film Les Opérateurs, a magic realist period adventure inspired by the Lumiére Brothers and their operators, is in pre-production as a feature film, and his feature screenplay Rosebud, based on the book The Homesteader, by the legendary African-American silent filmmaker Oscar Micheaux, moves into production shortly in South Dakota, Nebraska, and Iowa. Tellef is a graduate of the Juilliard School and divides his time between the U.S. and France.