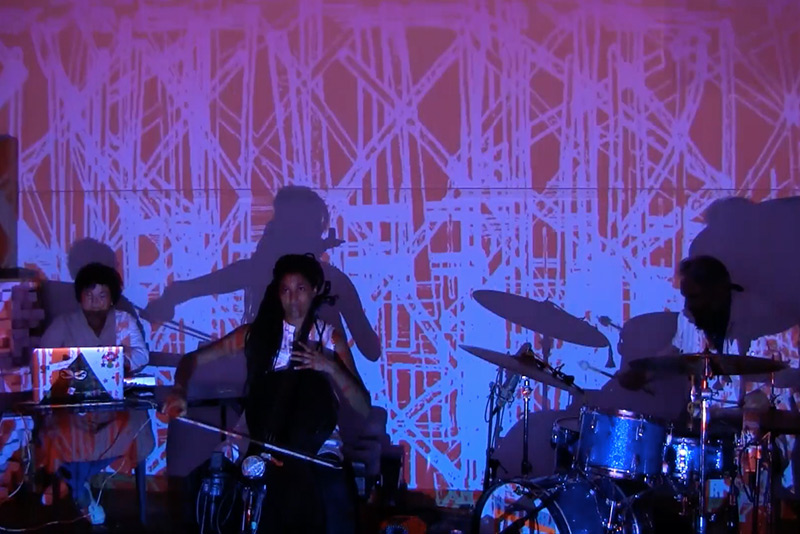 Adam Vida, Selina Trepp and Tomeka Reid are a Chicago-based trio comprising cello, percussion and live visual animation. Each performance is unique in that nothing is decided in advance pre-performance. All members react and respond equally.

Described as a “New Jazz Power Source” by the New York Times, cellist and composer TOMEKA REID has emerged as one of the most original, versatile, and curious musicians in Chicago’s bustling jazz and improvised music community over the last decade. Her distinctive melodic sensibility, always rooted in a strong sense of groove, has been featured in many distinguished ensembles over the years.

Selina Trepp (Swiss/American b.1973) is an artist researching economy and improvisation. Finding a balance between the intuitive and conceptual is a goal, living a life of adventure is a way, embarrassment is often the result.

In addition to the studio-based work, Selina is active in the experimental music scene. In this context she sings and plays the videolah, her midi controlled video synthesizer, to create projected animations in real-time as visual music. She performs with a varying cast of collaborators and as one half of Spectralina, her long running audiovisual collaboration with Dan Bitney.

Adam Vida is a multi-instrumentalist, composer, improviser, producer. percussionist and drummer. He is the Managing Director and Engineer at the Experimental Sound Studio, Chicago - ESS. Adam attended The New England Conservatory of Music in Boston and since 1997 has been an active member of the independent music community in Chicago where he has performed and recorded with a variety of rock, jazz, improvised, and experimental music projects. He is best known for his associations with the bands U.S. Maple, Singer, Dhalgren, DRMWPN, Azita, Redmoon Theater, Central Falls, Ken Vandermark and has toured extensively throughout North America and Europe with various projects.