Through a generous grant from the Hewlett 50 Arts Commission, Mills College has commissioned legendary composer, director, and choreographer Meredith Monk to create an immersive performance piece titled Indra’s Net, set to debut at Mills in November 2020.

The piece is inspired by the Buddhist metaphor of Indra’s Net, which illustrates the spiritual concepts of emptiness (śūnyatā) and dependent origination (pratītyasamutpāda). In Buddhist philosophy, Indra’s Net is infinitely large and bejeweled at each vertex. Glittering like stars, these many-faceted jewels reflect one another endlessly, representing the interconnectedness of the universe and the interdependence of all things.

Indra’s Net will be Monk’s third evening-length work dedicated to the examination of humans’ relationship to nature. An exploration of the interplay of music, movement, architecture, and space, the work focuses on the viewer’s perception and how that influences an individual’s relationships in the world.

Meredith Monk will work with members of the Meredith Monk Vocal Ensemble and chamber musicians from the San Francisco Symphony in the final performance. She will engage Mills students in workshopping the composition during onsite residencies. Additional support will be provided by Meyer Sound.

Indra’s Net will come to life as the musicians, representing the net’s vertices, are dispersed throughout Lisser Hall’s theater spaces. As audience members roam among the performers, the sophisticated sound design will amplify each performer, creating a web-like soundscape that delivers a distinctive and wholly unique musical experience to each audience member.

The Oakland and wider Bay Area communities will be invited into Monk’s creative process for Indra’s Net through open rehearsals, workshops, lectures on composition technique, and public dialogues held throughout the San Francisco Bay Area.

[This commissioned work] aligns with our mission to foster excellence in the arts, humanities, sciences, and technology while connecting students and faculty to each other, the local community, and the world.Elizabeth L. Hillman, Mills College President 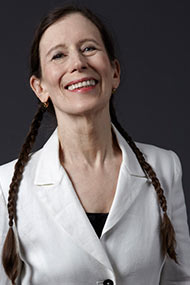 Hailed as one of the most unique and influential artists of our time, Meredith Monk creates transformative works at the intersections of performative boundaries. A composer, singer, director, choreographer, and creator of new opera, music-theater works, films, and installations, Monk is perhaps best known for her development of “extended vocal technique” and the deeply interdisciplinary nature of her works.

Monk’s honors include the Lillian Gish Prize, the National Medal of Arts, a MacArthur “Genius” Award, two Guggenheim Fellowships, and multiple Obie Awards. In addition to these honors, she has been hailed as “a magician of the voice” and “one of America’s coolest composers.” Monk’s work has been presented and celebrated at major venues across the globe.

About the Hewlett 50 Arts Commission

In 2017, Mills College received a $150,000 grant from the William and Flora Hewlett Foundation as part of the foundation’s $8-million commissioning initiative, the Hewlett 50 Arts Commissions, the largest initiative of its kind in the United States. With this grant, Mills College commissioned artist Meredith Monk to create and premiere an interactive, interdisciplinary performance piece titled Indra’s Net.

The Hewlett 50 Arts Commissions was designed to support the creation of 50 original and exceptional works by globally recognized performing artists in partnership with Bay Area nonprofit organizations. Created in honor of the Hewlett Foundation’s 50th anniversary, these commissions will bring world-class talent to Bay Area audiences, with the intent of inspiring, engaging, and bringing together the local arts community.