The Mills College Trans Studies Speaker Series, hosted by Emmy-Award winner Susan Stryker, Barbara Lee Distinguished Chair in Women's Leadership, offers a regular public forum for exploring transgender issues with some of today's leading thinkers, artists, and activists. All Trans Studies Speaker Series events are being held online and are free and open to the public.

Trans is Black and Black is Trans?: C. Riley Snorton and Rod Ferguson in Conversation with Susan Stryker
Thursday, February 18 | 5:00 PM PST
Presented in conjunction with We Are the Voices.
Part of Mills College Black History Month 2021 programming, BHM21.
In celebration of Black History Month, the Mellon-funded “We Are the Voices” public arts and humanities series and the Mills College Trans Studies Speakers Series are pleased to welcome Professor Rod Ferguson of Yale University (Aberrations in Black: Toward a Queer of Color Critique)  and Professor C. Riley Snorton of University of Chicago (Black on Both Sides: A Racial History of Trans Identity). They will be in discussion with Susan Stryker, Barbara Lee Distinguished Chair in Women's Leadership, on the emergence of Black Trans Studies, the Black Trans Lives Matter Movement, and Black Trans Histories.

My Gender is Black?: The Speculative Refusals of Black Queer/Trans/Feminism, a conversation between Tavia Nyong’o and Susan Stryker
Thursday, March 18 | 5:00 PM PDT
Contemporary Black art, thought, and activism is infused with feminism, queerness and transness like never before. But this dissidence is also frequently lived through modalities that reject white normative frameworks of sex and gender, declaring, with non-binary writer Hari Ziyad, that “My Gender is Black.” What recent history has set the stage for this particular conjuncture? How have queer/trans/feminist refusals drawn from and contributed to critical theories of antiblackness? In particular, how have these refusals modulated afropessimist and afrofuturist tendencies? Refusal and reticence, this talk argues, has shaped Black responses to the ongoing destruction and devaluation of Black life even in a period of growing homo- and trans-normativity. Black queer/trans/feminist refusals must dynamically negotiate despair on the one hand, and, on the other, forms of political engagement that risks reproducing an antiblack world. Black aesthetics, the talk concludes, has become an increasingly important site for staging this tension, if not fully resolving it. Rather than representation in liberal humanist terms, art affords non-binary blackness possibilities of opacity, abstraction, speculation, and collectivity. 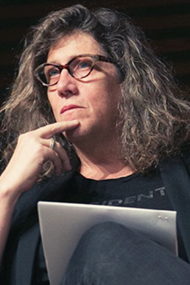 Susan Stryker holds the Barbara Lee Distinguished Chair in Women's Leadership at Mills College, 2020–22. She is professor emerita of gender and women's studies at the University of Arizona and was a Presidential Fellow at Yale University in 2019–20.

Stryker is the author, co-author, editor, or co-editor of numerous books and anthologies, including Gay by the Bay: A History of Queer Culture in the San Francisco Bay Area (Chronicle 1996), Queer Pulp: Perverse Passions in the Golden Age of the Paperback (Chronicle 2000), The Transgender Studies Reader (Routledge 2006), The Transgender Studies Reader 2 (Routledge 2013), and Transgender History: The Roots of Today’s Revolution (Seal Press 2008, 2017).

Stryker's accolades include an Emmy Award for the documentary film Screaming Queens: The Riot at Compton's Cafeteria (Frameline/ITVS 2005), a Lambda Literary Award for the co-edited anthology The Transgender Studies Reader (Routledge 2006), and the Ruth Benedict Book Prize for co-edited anthology The Transgender Studies Reader 2 (Routledge 2013). She is founding co-editor of the academic journal TSQ: Transgender Studies Quarterly. In addition to developing and consulting on various media projects, Stryker’s current work in process is Changing Gender: A Trans History of North America, under contract to Farrar Straus Giroux.