The East Bay, Mills’ home, has long been the birthplace of crucial performance poetry collectives and publishing efforts, especially those aligned with racial and gender justice. Continuing the Mills tradition of experimentation in graduate and undergraduate education, We Are the Voices supports the development of innovative, even risky, ways of presenting poetry and scholarship in nonacademic settings. With the support and guidance of faculty advisor Stephanie Young, students design and implement public projects that explore the transformative power of literature in East Bay communities and beyond.

Maidens in the Moorlands: Black Women in 19th-Century British Literature 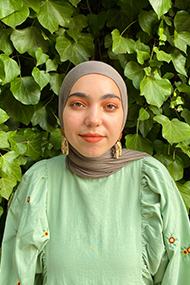 Tiffany Cruz presented her letterpress illuminated book project on April 22nd in the Heller Room at the Mills College library. She compared two 19th-century British novels whose protagonists are Black Women: the 1808 epistolary novel of manners, The Woman of Colour (Anonymous) and the 1897 fin-de-siecle Gothic sensation The Blood of the Vampire (Florence Marryat). In the illuminated book,Tiffany put these texts in conversation with reproduced images of European artworks that centered upper class Black women; these juxtapositions showcase how raced and gendered Eurocentric conceptions of selfhood limited both lived and literary arcs for the Black woman, regardless of her financial status. The project demonstrates the impossibility of even a fictional happy ending for the Black woman in a country whose empire was based on racial capital. In her lecture, she shared the inspiration behind her project, explained the aesthetic and material choices she made in creating the physical book, and presented and analyzed examples from the book itself. Tiffany’s lecture was followed by a Q&A with input from the in-person and live stream audience. The digital version of Maidens in the Moorlands: Black Women in 19th-Century British Literature and event footage can be found on her website. 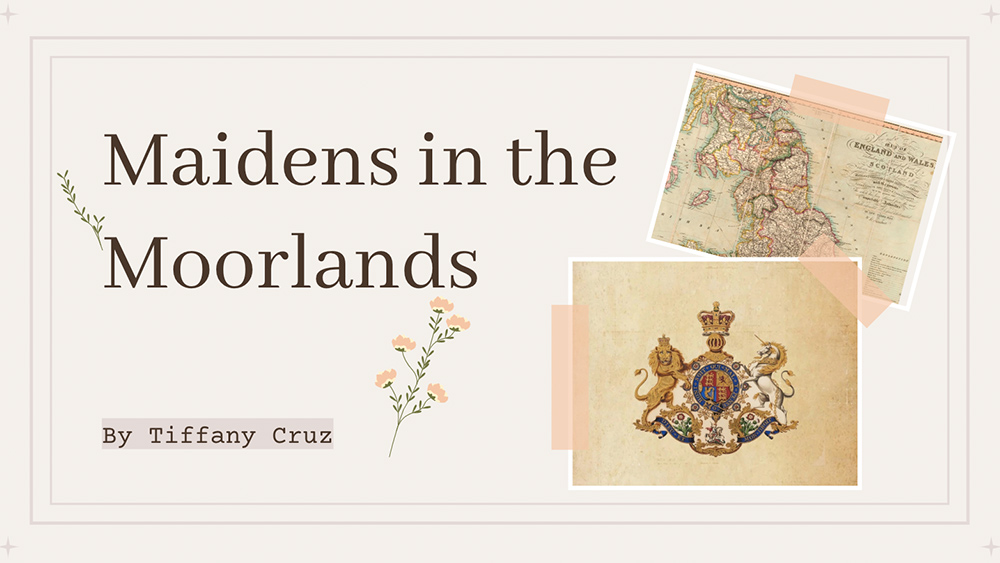 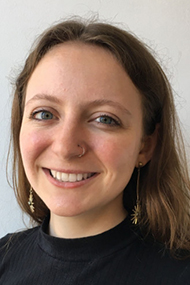 Caroline is developing a project that brings together LGBTQ+ poets, writers, and activists impacted by the criminal justice system in conversation around how mass incarceration affects the LGBTQ+ community. The goal is to produce an original journal of work that imagines a radically just future beyond the confines presented by mass incarceration and systemic inequities. The project seeks to catalyze discussion around mass incarceration, LGBTQ+ rights, and the transformative social change that occurs when centering the voices and stories of those most impacted by the issues at hand. 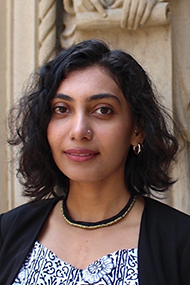 Zehra Jabeen Shah curated a 3-day exhibit, Decentering the Archive: Migration of Memory, Tradition & Identity. The project was decolonial in nature. It aimed to challenge and expand the notion of what it means to be an ‘archive.’ It also questioned the politics of archival materials within modern working museums. Working with 5 different artists, the exhibit explored how archives journey from one space to another, encompassing a whole life of their own. They are not merely passive objects neatly placed behind decorated cabinets, but ones that grant life to legends, traditions, and bodies containing their own pasts and emotional history. The artists she worked with were Andrea Guskin, Tianzong Jiang, Ava Koohbor, Jesse Dutton-Kenny and Alice Lincoln-Kook. 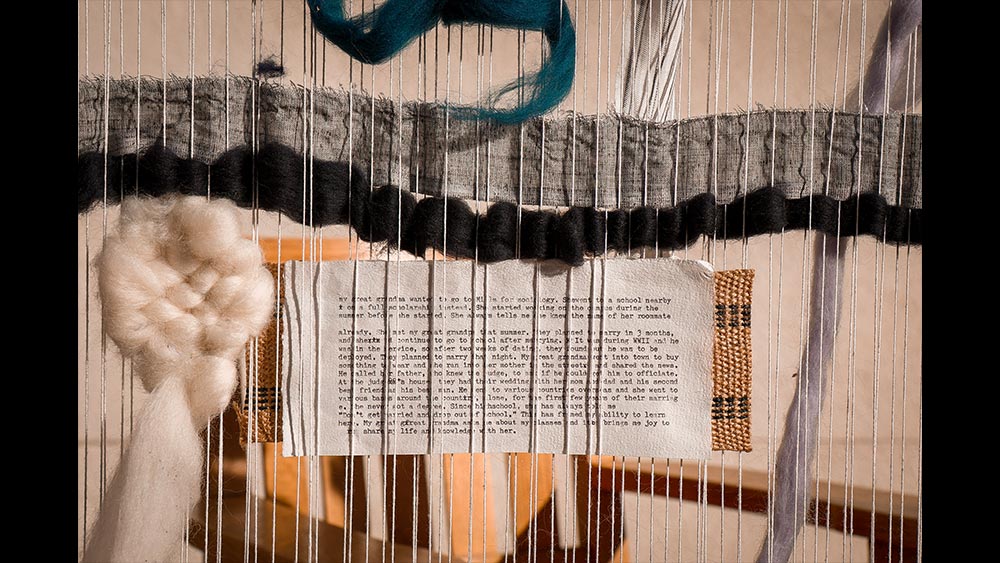 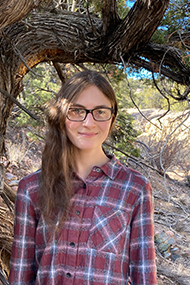 Tovah curated Perforations Journal, a digital multimedia project that attempts to examine and peel open abstractions of borders--particularly the U.S.-Mexico border--and what lies beneath by bringing visual poems, art, and maps into proximity. The journal presents original poems by four contemporary writers, reprinted artworks, and one of many historical threads of maps that depict North America with and without borders–from the 19th century to the present. Perforations exists as a small opening into a large and complex conversation that she hopes will encourage readers to expand their curiosity beyond the works that the journal is honored to hold. She hopes to continue expanding Perforations journal into the future. 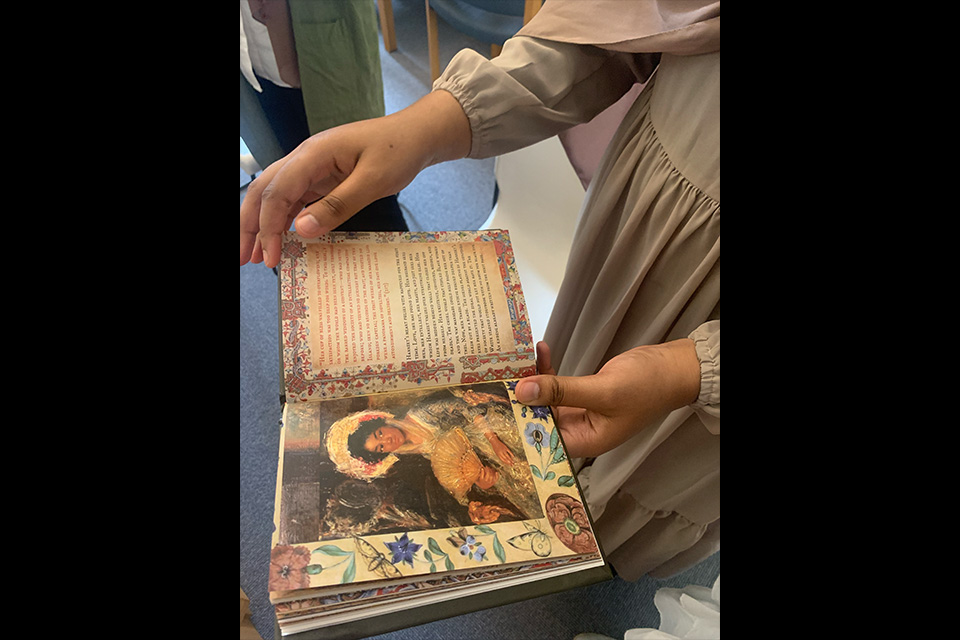 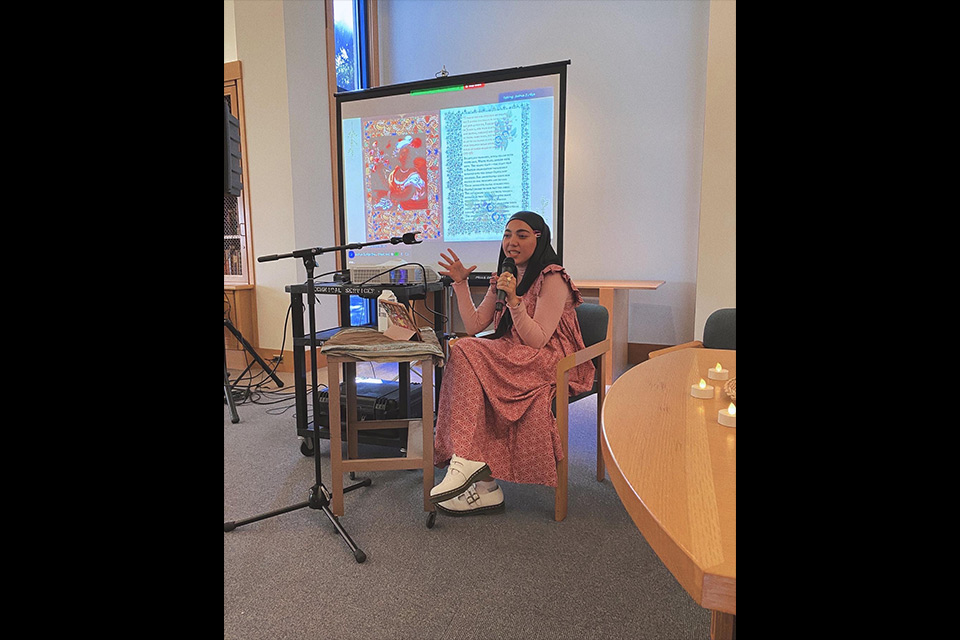 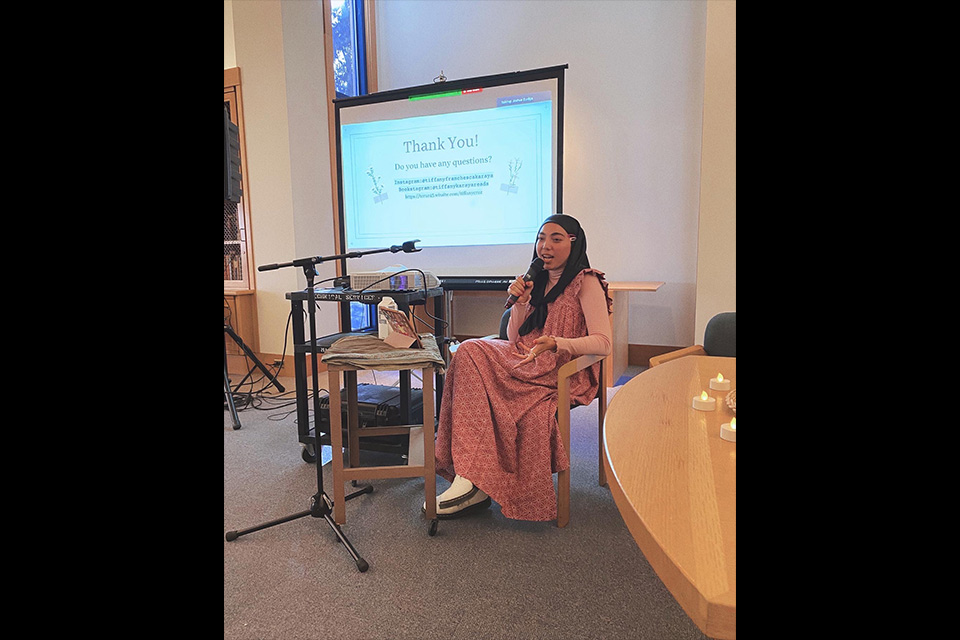 Tiffany Cruz presenting a page from her book. Photo by Javon Canlas. 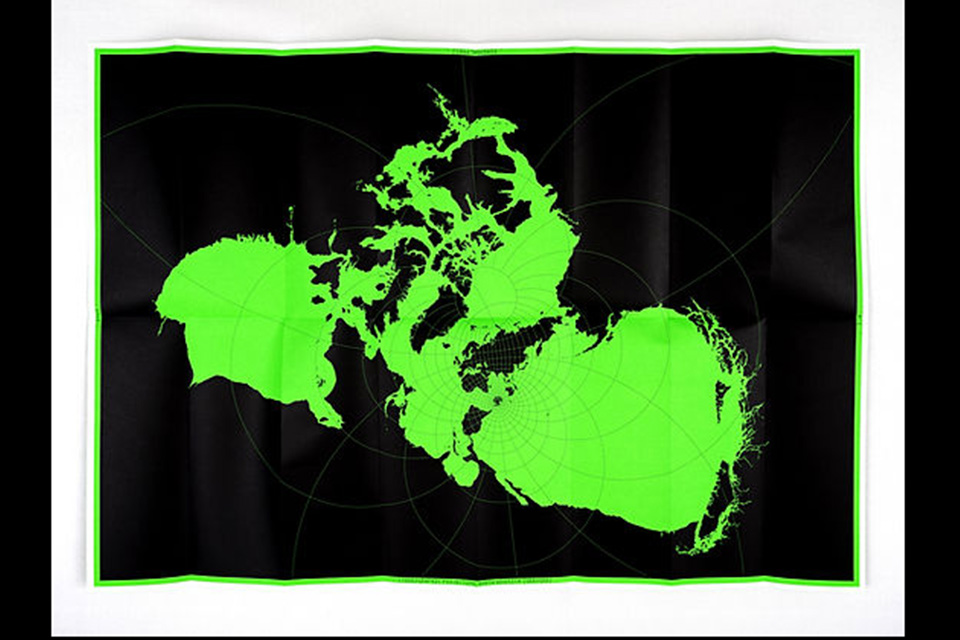 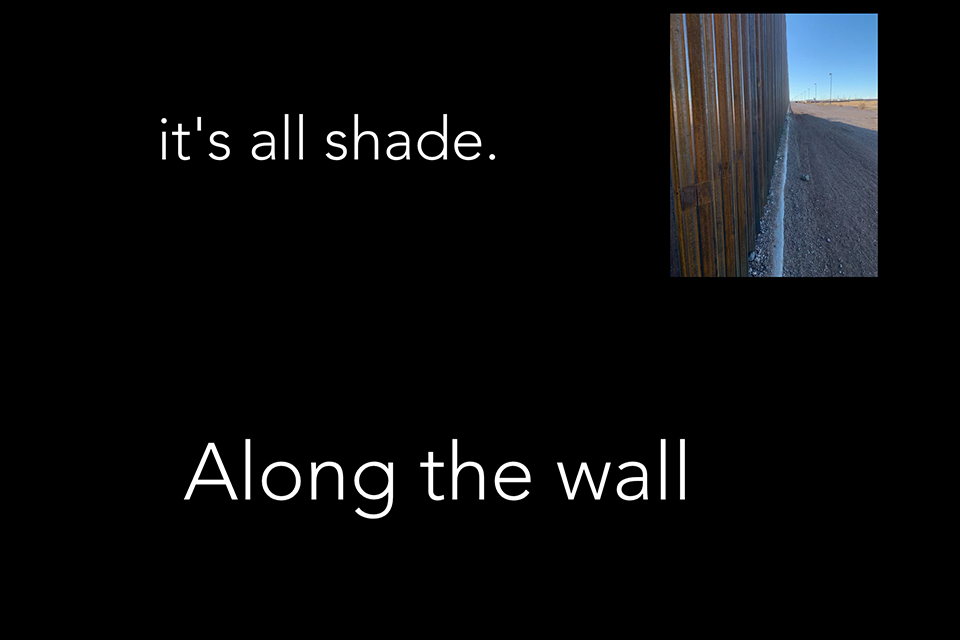 Excerpt from "Notes from a Phone's Notes App," collected during a December 2021 visit to Columbus, NM, across from Palomas, Chihuahua, Mexico while brainstorming for the journal. 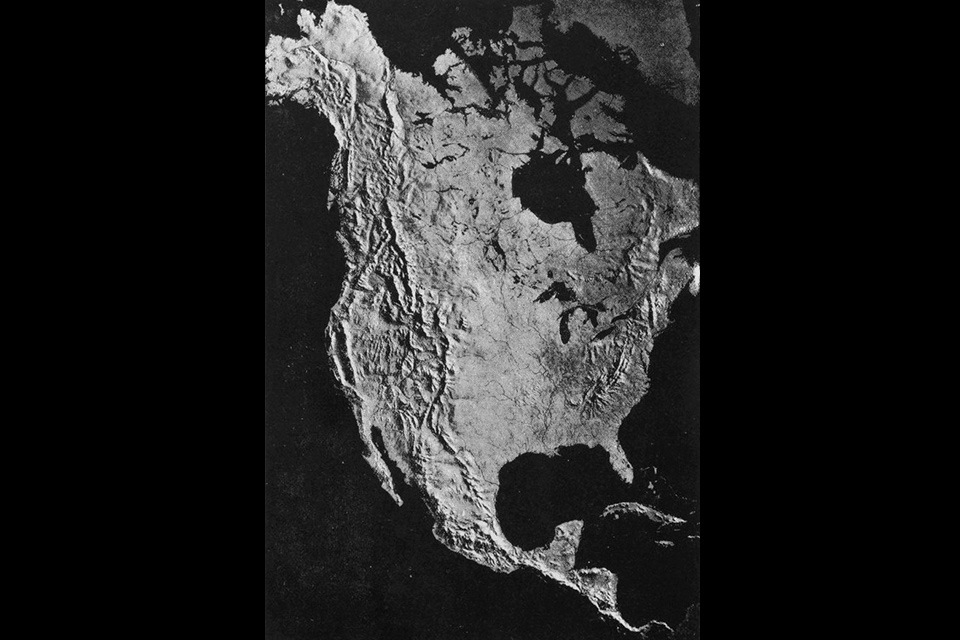 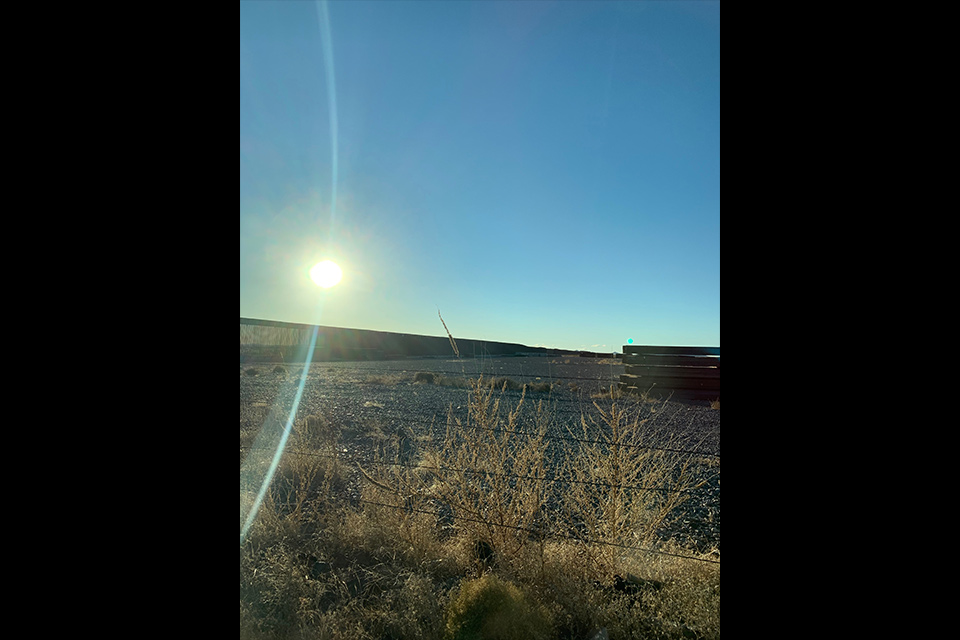 Tovah Strong — December, 2021 photograph of the border wall outside of Columbus NM, across from Palomas, Chihuahua, Mexico.