An Evening with Eiko Otake 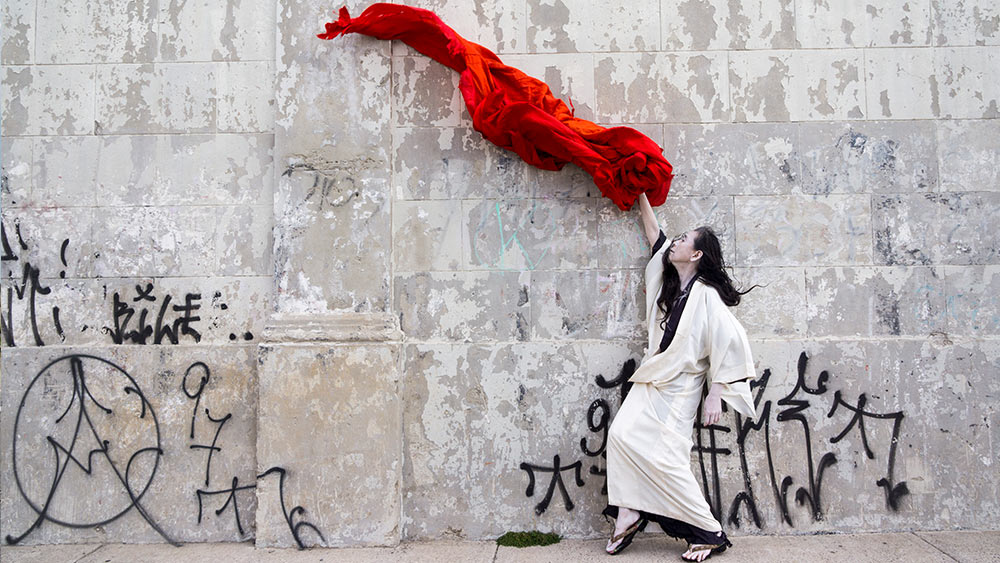 Please note: there is an audio issue at the start of the presentation which resolves at 6:00..

The films, all created during the pandemic, include A Body in a Cemetery (15 min), an edited recording of her September 2020 performance in Brooklyn’s Green-Wood Cemetery, mourning the dead from the pandemic as well as from past centuries; and Projecting Fukushima in Tokyo (35 min), which captures Eiko performing throughout Tokyo’s streets and underground locations, marking the 10-year anniversary of the Fukushima nuclear meltdown. Eiko concludes the evening with a report on her new work, Slow Turn, which includes a monologue performed on the 20th anniversary of the 9/11 attacks along the Hudson River near where the Twin Towers once stood.

Otake has been surprising audiences worldwide since she set out in 2014 to make work on her own. The films she will share at Mills are part of this prodigious collection of intimate, emotionally evocative, and aesthetically arresting works that leave the stage behind, and place her in environments ranging from a train station in Philadelphia to the coastline of Fukushima. A 2022 Mills Performing Artist in Residence, Otake seems more inspired than ever, and has created a not-to-be-missed body of work that wrestles with destruction, mortality, relationship to the land, kinship and history.

This screening marks Otake’s first public event after turning 70 and the beginning of her next 10-year project: Eiko Invites Herself.

Born and raised in Japan and a resident of New York since 1976, Eiko Otake is a movement–based, interdisciplinary artist. After working for more than forty years as Eiko & Koma, she began performing her own solo project A Body in Places in 2014.

After studying with Kazuo Ohno and Tatsumi Hijikata in Japan and Manja Chmiel in Germany, Eiko & Koma created 46 interdisciplinary performance works, two career exhibitions and numerous media works. Their durational performance living installations were commissioned by the Whitney Museum, the Walker Art Center, and MoMA. Their Retrospective Project (2009 to 2012) culminated in a comprehensive monograph, Time is Not Even, Space is Not Empty, published by the Walker Art Center. Eiko & Koma were honored with the first United States Artists Fellowship (2006) and Doris Duke Artist Awards (2012). They were the first collaborative pair to share a MacArthur Fellowship (1996) and the first Asian choreographers to receive the Samuel H. Scripps American Dance Festival Award (2004) and the Dance Magazine Award (2006).

Eiko’s solo project began with a twelve-hour performance at the Philadelphia Amtrak station. Since then, Eiko has performed variations of A Body in Places at over forty sites. In 2016, Eiko was the subject of the 10th annual Danspace Platform, a month-long curated program that brought her a special Bessie citation, an Art Matters grant, and the Anonymous Was a Woman Award. In November, co-presented by Performa 2017 and Met Live Arts, Eiko occupied on each of the three Metropolitan Museum of Art sites while projecting a seven-hour video she created from William Johnston’s photographs of herself dancing in ruined Fukushima.

Since 2017, Eiko has explored various ways to maximize her encounters with collaborating artists of varied backgrounds and practices, manifesting in her new series of works, The Duet Project: Distance is Malleable, which was premiered at American Dance Festival in the summer of 2019.

ABOUT MILLS COLLEGE DANCE DEPARTMENT
Founded in 1941, the Mills Dance Department offers one of the oldest ongoing dance programs in the country. The longevity of the program and its international reputation are testaments to the quality of instruction and the successful philosophy that guides our curriculum. Our distinguished Mills faculty and visiting artists work closely with students to help them develop into articulate artists who can express themselves both creatively and through critical discourse.
The strength of our degree programs springs from our unique combination of creative and critical dance studies, choreography, and performance practices. We help students hone their skills in performance, choreography, research, and dance writing, both critical and scholarly. The Mills Dance Program is both small and highly selective. This allows us to provide students with an immersive experience and the rich one-on-one interaction that is the hallmark of a Mills education.

ABOUT THEODORA FAUST-ANDERSON PROJECT and SECOND CHANCES: MORE DANCE AT MILLS
These Funds support the annual engagement of a local or global guest artist or scholar in the Mills College Dance Department to share forms of dance, in areas other than those taught regularly by full-time faculty, with the goals of expanding the current offerings of the College and further enhancing its standing and reputation in the field. The project aims to culminate with an innovative public presentation reflective of a compassionate and comprehensive understanding of the world.
The Theodora Faust-Anderson Project, also known as the Thea Project, was established in memory of Thea Faust-Anderson, who graduated from Mills with a degree in dance in 2014. We appreciate this opportunity to celebrate Thea’s life as an advocate for global learning and artistic expression, including using dance to help others through performance and dance therapy.

ABOUT MILLS PERFORMING ARTIST IN RESIDENCE
The Mills Performing Artist in Residence program cultivates engagement opportunities for the Mills College and local communities to experience and work with national and international performing artists. Activities including lectures, workshops, open rehearsals and showings are hosted on the Mills College campus in Oakland. California.

ABOUT MILLS PERFORMING ARTS
Situated on the Mills College campus in Oakland, California, Mills Performing Arts is a multi-venue performing arts center committed to promoting action and exchange in the performing arts, and supporting artists and scholars who reflect, explore, and celebrate the abundant cultural, racial, gender, and economic diversity of our society.