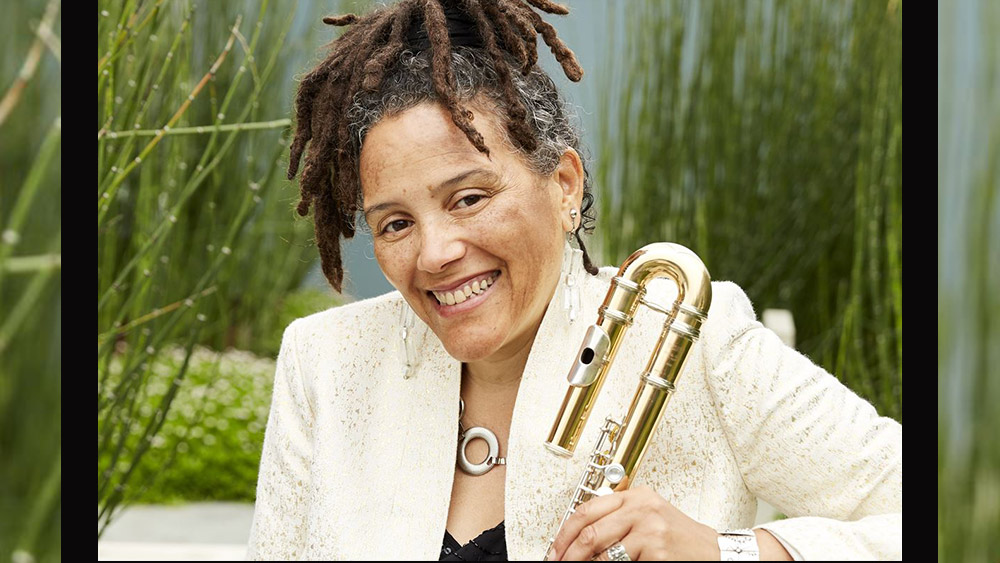 Composer/Improviser Nicole Mitchell is the Jean Macduff Vaux Composer-in-Residence 2021-2022. Her week long residency will culminate in this concert of her work.

Nicole M. Mitchell is an award-winning creative flutist, composer, bandleader and educator. She is perhaps best known for her work as a flutist, having developed a unique improvisational language and having been repeatedly awarded “Top Flutist of the Year” by Downbeat Magazine Critics Poll and the Jazz Journalists Association (2010-2017). Mitchell initially emerged from Chicago’s innovative music scene in the late 90s, and her music celebrates contemporary African American culture. She is the founder of Black Earth Ensemble, Black Earth Strings, Sonic Projections and Ice Crystal, and she composes for contemporary ensembles of varied instrumentation and size, while incorporating improvisation and a wide aesthetic expression. The former first woman president of Chicago’s Association for the Advancement of Creative Musicians, Mitchell celebrates endless possibility by “creating visionary worlds through music that bridge the familiar with the unknown.” Some of her newest work with Black Earth Ensemble explores intercultural collaborations; Bamako*Chicago, featuring Malian kora master, Ballake Sissoko, made its American debut at Chicago’s Hyde Park Jazz Festival in September 2017, and Mandorla Awakening with Kojiro Umezaki (shakuhachi) and Tatsu Aoki (taiko, bass, shamisen), was just recently released on FPE records (Chicago) last spring. Recently she celebrated a compositional premiere with Procession Time, a suite inspired by the work of Harlem Renaissance artist Norman Lewis, that was performed by the San Francisco Contemporary Music Players and conducted by Steve Schick in October 2017. Mitchell has also recently been interested in multidisciplinary work, through the incorporation of original video art with her music (Mandorla Awakening I and II, Interdimensional Interplay for Solo Disklavier and Prerecorded Flute). In January 2018, Mitchell was recently the Artist in Residence at New York’s Winter Jazz Fest, where she performed four suites of her compositions, including Art and Anthem (for poet Gwendolyn Brooks), Maroon Cloud (inspired by her writing “What Was Feared Lost” from Arcana VIII edited by John Zorn), Pteradatyl, a new trio with vocalist Sara Serpa and Liberty Ellman, and her latest Afrofuturist suite, Mandorla Awakening, which was cited as a top jazz recording in the New York Times and the LA Times for 2017. As a composer, Mitchell has been commissioned by the French Ministry of Culture, the Chicago Museum of Contemporary Art, Art Institute of Chicago, the Stone, the French American Jazz Exchange, Chamber Music America (New Works), the Chicago Jazz Festival, ICE, and the Chicago Sinfonietta. Mitchell has performed with creative music luminaries including Craig Taborn, Roscoe Mitchell, Joelle Leandre, Anthony Braxton, Geri Allen, George Lewis, Mark Dresser, Steve Coleman, Anthony Davis, Myra Melford, Bill Dixon, Muhal Richard Abrams, Ed Wilkerson, Rob Mazurek, and Billy Childs, and Hamid Drake. She is a recipient of the Herb Alpert Award (2011), the Chicago 3Arts Award (2011) and the Doris Duke Artist Award (2012).  Mitchell was a Professor of Music at University of California, Irvine, teaching composition and improvisation in the graduate program of Integrated Composition, Improvisation and Technology for several years. Now, she is the new director of jazz studies in the University of Pittsburgh's Deitrich School.