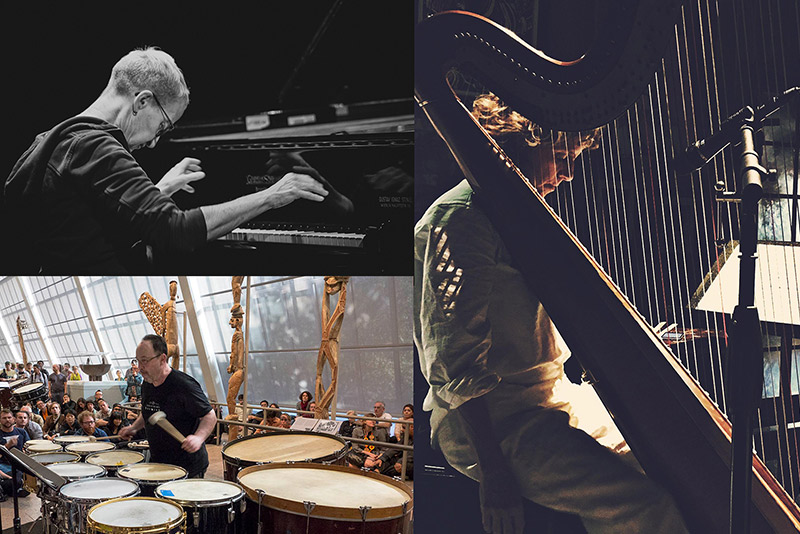 Thanks for completing an audience survey.

The pianist, composer, bandleader and professor Myra Melford—whom the New Yorker called “a stalwart of the new-jazz movement”—has spent the last three decades making brilliant original music that is equally challenging and engaging. Culling inspiration from a wide range of sources including Cecil Taylor, the blues of her native Chicago, the poetry of Fernando Pessoa, literature by Eduardo Galeano, visual art and architecture, the Association for the Advancement of Creative Musicians (AACM), yoga, and Eastern philosophy; she’s explored an array of formats, among them ruminative solo-piano recitals, deeply interactive combos and ambitious multidisciplinary programs. Her newest ensemble project, Fire and Water, debuted its first release, For the Love of Fire and Water, in April 2022 on RogueArt Records. The Other Side of Air, the 2018 release by her quintet Snowy Egret, was named one of the best jazz recordings of 2018 by the New York Times and one of NPR Music’s 50 Best Albums of 2018. “This is music with an endless capacity for elasticity and surprise,” NPR wrote, “along with an affirming spirit of coherence.”

She has received some of the most prestigious honors available to a musician: a 2000 Fulbright Fellowship, a 2012 Alpert Award in the Arts for Music and, in 2013, a Guggenheim Fellowship, the Doris Duke Performing Artist Award and the Doris Duke Residency to Build Demand for the Arts.

Parkins and Ikue Mori received the Prix Ars Electronica honorary mention for their project Phantom Orchard and Parkins, Kaffe Matthews, and Mandy MacIntosh received a BAFTA for best interactive media for their collaborative project, Weightless Animals. Parkins has also been awarded residencies from Civitella Ranieri in Umbria, Italy, the Ruskin School at Oxford University in Cambridge, Wooda Arts Residency in England, Paf (France), STEIM (Amsterdam), RPI/IEAR (Troy), Harvestworks, the Watermill Center, and the Centre for Dance and Choreography in Montpellier.

Over a 30-year career Parkins has worked with an unlikely range of collaborators. She has recorded and toured with Björk. A series of concerts with Yoko Ono led to the live album Blueprint for a Sunrise. Early collaborations with John Zorn include performances of his game piece Darts at the MOMA Sculpture Garden and touring the groundbreaking work Cobra as well as performing in its first studio recording for Swiss label, Hat Art. Parkins was selected by Pauline Oliveros to play bass accordion for a performance of the composer’s concerto for multiple accordions with the Brooklyn Philharmonic and premiered a piece written for her by Yasunao Tone, The Origin of Geometry: an Introduction, at Phil Niblock’s loft Experimental Intermedia. In the 2010 Whitney Museum exhibition, Christian Marclay: Festival, Parkins directed and performed a week-long program of concerts that activated his graphic scores. For over ten years Parkins toured and recorded with composer/conductor/composer, Butch Morris in his seminal conductions. Long-time collaborator, Fred Frith, invited her into Skeleton Crew when the band expanded from a duo with Tom Cora into a trio. She performed in many of Frith’s projects and they frequently shared the stage as improvisers. Important relationships also include Phantom Orchard with Ikue Mori, and projects with Nels Cline, William Winant and Elliott Sharp.

There are six solo harp records on various labels, including Table of the Elements, Atavistic Records and Good Child Music. Her compositions and band projects are released by Avant, Tzadik, Editions Mego, Homestead, Victo, One Little Indian, and RecRec. Recent records include, Captiva, a solo harp project on Good Child Music and MZM with Miya Masaoka and Myra Melford on Infrequent Seams. Case Study Records, Parkins’ own imprint issued Green Dome Thinking in Stitches, with Ryan Sawyer and Ryan Ross Smith, the second project on the label.

In a curatorial role, Parkins has created programs for the Music Unlimited Festival in Wels, Austria, numerous residencies at The Stone in New York City and in collaboration with choreographer Jennifer Monson, Sidewinder for Movement Research at St. Marks Church.

Parkins served as professor in the Sound Arts Department at SMFA in Boston for two years and has taught in the undergraduate program at Bard College. She has been invited to give talks at the Ruskin School/Oxford, Princeton University, Pomona College, Columbia University and has lead improvisation workshops in several festivals including Counterpulse in Glasgow, Météo in Mulhouse, and will be improvisor in residence at the Klangspuren Festiva/Austrial in 2019. Currently, Parkins holds the Darius Milhaud Chair in Composition at Mills College. She been a professor in the Music Department at Mills College in Oakland, California since 2011.

In 2016, Winant was awarded a large unrestricted grant from the Foundation for Contemporary Arts in recognition for his groundbreaking work as a contemporary percussionist. In 2014 he received a Grammy nomination for his recording of John Cage’s historic solo work, 27’ 10.554” for a percussionist, on Micro Fest Records.

He has recorded and toured worldwide with his own groups including ROOM, w/Chris Brown and Larry Ochs, CHALLENGE, with Anthony Braxton and David Rosenboom, WAKE, with Frank Gratkowski and Chris Brown, the ABEL/ STEINBERG/WINANT TRIO, and the WILLIAM WINANT PERCUSSION GROUP.

He is principal percussionist with the San Francisco Contemporary Music Players, has been closely associated with NYC composer John Zorn, and has made numerous recordings, and performed in many projects throughout the world with the composer. Starting in 1995 he has been the percussionist with the avant-rock band Mr. Bungle, has made two recordings (Disco Volante and California on Warner Brothers), and has toured throughout the world with this group. For many years he had worked with composer Lou Harrison, recording and premiering many of his works, and in March of 1997 he participated in the world premiere of Lou Harrison’s quintet Rhymes with Silver featuring cellist Yo-Yo Ma and the Mark Morris Dance Group, and has toured the piece throughout the United States and Great Britain.

In the fall of 2011, he joined Mike Patton’s Italian pop music project Mondo Cane which features a 12 piece band + string orchestra, and have recently completed tours of South America and Australia.

In the fall of 2003, celebrating the 50th anniversary of the Merce Cunningham Dance Company, Mr. Winant, along with composers Takehisa Kosugi and Christian Wolff, created music for a series of eight special Events staged by Merce Cunningham and Dancers at London’s Turbine Hall at the Tate Modern. Winant continued to tour throughout Europe and the United States with the dance company until 2009.

His recording of Lou Harrison’s La Koro Sutro (which he produced for New Albion Records) was the New York Times Critic’s Choice for best contemporary recording of 1988. In 1999 he produced a recording of music by 20th-century avant-garde composers with the influential rock band Sonic Youth; Good- bye 20th-Century (SYR4), was hailed by both The Los Angeles Times and New York’s Village Voice as one of the best compendiums of this type of music ever recorded. His recording with cellist Joan Jeanrenaud of her CD Strange Toys was nominated for a Grammy in 2009. Also he along with guitarists Henry Kaiser and David Lindley, created special music for Werner Herzog’s 2009 Oscar nominated documentary Encounters at the End of the World. His latest recording with Roscoe Mitchell combining three trios and recorded over 3 days at the Museum of Contemporary Art in Chicago, is due out on the ECM label in 2017.

For ten years he was principal percussionist with the Cabrillo Festival Orchestra (Dennis Russell Davies, director), and timpanist with the Philharmonia Baroque Orchestra 1985–1988 (Nicholas McGegan, director).

He is a Visiting Lecturer at the University of California at Santa Cruz, and teaches at Mills College and the University of California at Berkeley. For eight years Mr. Winant was Artist-in-Residence at Mills College with the critically acclaimed Abel-Steinberg-Winant Trio. Formed in 1984, the ASW Trio has premiered over 25 new works for violin, piano, and percussion at major festivals and recitals throughout the world. Their recordings can be heard on the New Albion, Tzadik, and CRI/New World labels.