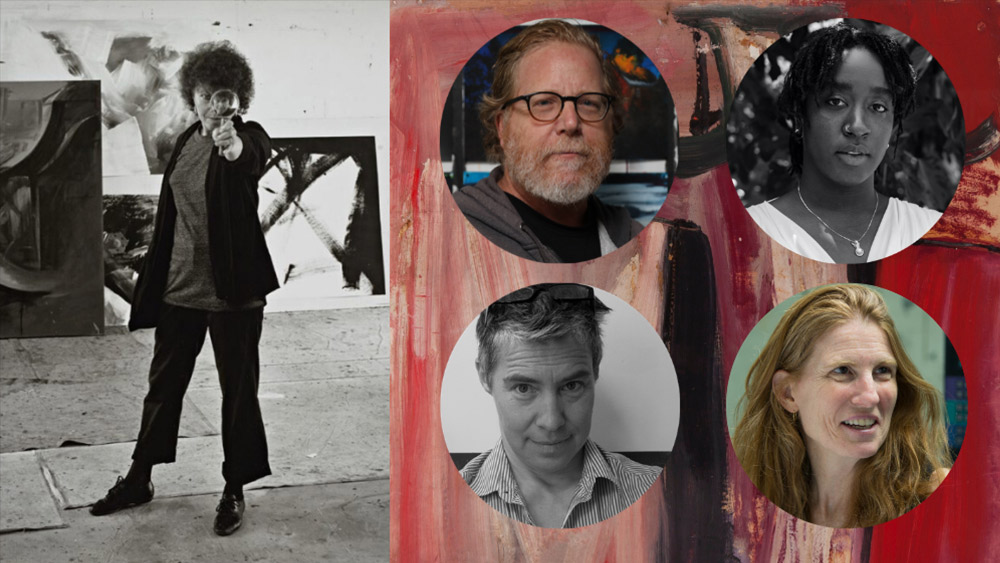 An art professor at Mills during the last decade of her life, Jay DeFeo (1929-1989) was dedicated to supporting young artists. In addition to establishing the Jay DeFeo Foundation, the Artist’s will endowed the Jay DeFeo MFA Prize at Mills College, a monetary, juried award given annually to one or more graduating MFA students in Studio Art.

James Gouldthorpe, Painter, Senior Conservation Technician, San Francisco Museum of Modern Art
James Gouldthorpe creates large painting installations that when installed they transform an exhibition space into an immersive narrative. The work often resembles an expansive abstract graphic novel that examines the intersection of literature and visual art. During the pandemic he create Covid Artifacts, a daily series of paintings archiving the objects, people and events that defined the year. A selection of Covid Artifacts is currently on exhibit at SFMOMA, through September 2021.

Along with his painting, he works with video, photography and audio. He has been a resident at the Prelinger Archive, Willapa Bay AIR, Montalvo Art Center and Recology at the San Francisco Dump. He has received several grants including the Lillian Orlowsky and William Freed Grant, the Investing in Artist Grant from the Center for Cultural Innovation and the Jay DeFeo Prize. His work has been shown widely nationally and internationally including Montalvo Arts Center, The Contemporary Jewish Museum, The Provincetown Art Museum, Terrian Gallery Spokane, Southern Exposure, and The San Francisco Arts Commission Gallery. He received an MFA from Mills in 1995. For the past 26 years he has worked as the Senior Conservation Technician in the Conservation Studio at SFMOMA. Visit jgouldthorpe.com

Yétúndé Olagbaju, Artist and Maker
Yétúndé Olagbaju is an artist and maker, currently residing in Oakland, CA. They utilize video, sculpture, action, gesture, and performance as through-lines for inquiries regarding Black labor, legacy and processes of healing. They are rooted in the need to understand history, the people that made it, the myths surrounding them and how their own body is implicated in history’s timeline.They have shown work and projects with Oakland Museum of California, Portland Institute of Contemporary Art, Southern Exposure, SOMArts Cultural Center, Untitled Art Fair, Art Basel, and more. They hold an MFA from Mills College and are the recipient of the inaugural Nancy Cook Fellowship, the Murphy Cadogan Awards, and the Jay DeFeo Prize. They are currently in residence at the Headlands Center for the Arts and are represented by Pt. 2 Gallery. Visit yetundeolagbaju.com

Betsy Schneider, Artist and Educator
Betsy Schneider is a photo/video artist whose work focuses on transformations of individuals and families over time and place. Her tools range from scanners and screen shots to digital video and 8×10 inch view camera film photography. Her work has been exhibited and published internationally for over 20 years and is held in multiple collections among them the Houston Museum of Fine Art, the Nelson-Atkins Museum, Museet for Fotokunst in Odense, Denmark. She is a 2011 Guggenheim fellow and the 1997 recipient of the Jay DeFeo Prize from Mills College. Her Guggenheim Fellowship project "To Be Thirteen" was published as a book by Radius in 2017 and is a solo exhibition that originated at the Phoenix Museum of Art in 2018 and currently is being traveled by the Center for Creative Photography.

Schneider holds a BA from the University of Michigan, a BFA from the School of the Art Institute of Chicago, and an MFA from Mills College in Oakland, California. From 2002 to 2016 she was a professor in the School of Art at Arizona State University, in 2016 she relocated to the Boston Area and since 2017 has worked for ASU as a lecturer, designer, developer and coordinator of one of the first online photography BFA programs in the world. Over the course of the Covid pandemic she co founded FotoFika a weekly workshop that guided photography professors from around the country in teaching online. In addition to her remote position at ASU, she is a regular adjunct faculty member at Emerson College and Massachusetts College of Art and Design and has held visiting professor positions at Hampshire College and Harvard University. Visit betsyschneider.com

Nomi Talisman, Filmmaker and Artist
Nomi Talisman is a San Francisco based award winning independent filmmaker and artist. Her short film Last Day of Freedom (2015) was nominated for an Academy Award, won an Emmy and the International Documentary Association (IDA) Best Short. For her work on this film, Talisman was awarded Dukes’ Center for Documentary Studies Filmmaker Award, a California Public Defenders Association Gideon Award for support to indigent minorities, and a US Congressional Black Caucus Veterans Braintrust Award in recognition for her outstanding commitment to civil rights and social justice.

Originally from Israel, Talisman’s professional work with legal mitigation specialists drew her to make films about the criminal justice system, and enabled building relationships and trust with the prisoners and families whose stories are at the heart of her animated documentary films. Visit nomitalisman.net