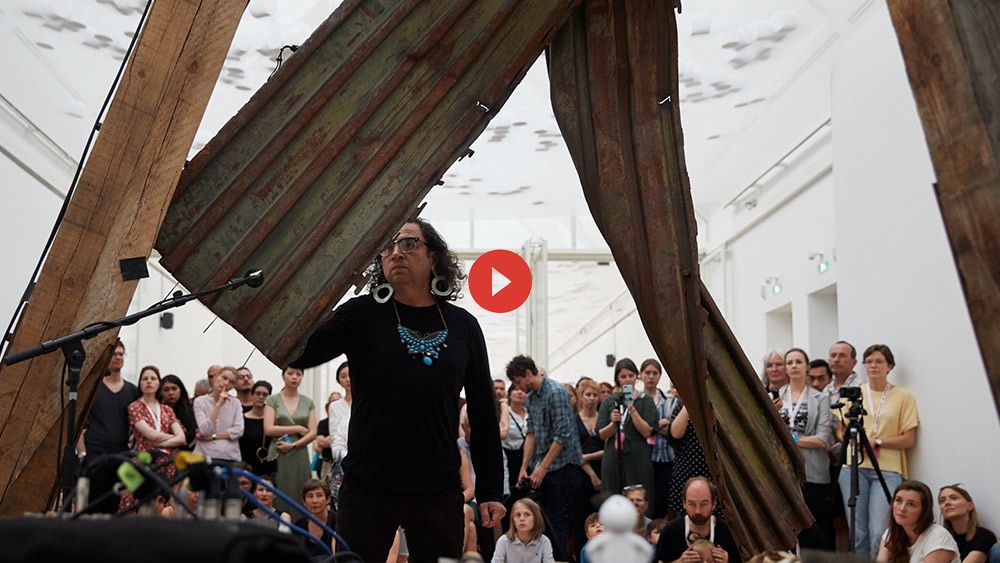 Galindo will discuss their work Siguiendo Los Pasos del Niño Perdido/Following the Steps of the Lost Child (2017), recently acquired by the Mills College Art Museum. The piece is a graphic score based on the movements of a lost child, embroidered onto a flag used along the U.S./Mexico border to indicate the location of water tanks for migrants. The talk will be accompanied by a screening of Border Cantos, a collaboration with photographer Richard Misrach in which the quotidian artifacts of migration are fashioned into instruments to be performed. We will close with a Q&A with the audience.

Siguiendo Los Pasos del Niño Perdido/Following the Steps of the Lost Child was identified and selected for inclusion in the MCAM Collection by Mills students in the fall 2020 Museum Studies Workshop, and represents our efforts to diversify the MCAM Collection and support work by BIPOC and LGBTQ artists. You can see Galindo’s piece in our digital exhibition Shifting Perspectives, online now.

Guillermo Galindo (b. Mexico City) is an experimental composer, sonic architect, performance artist and Jungian Tarotist, who redefines the conventional boundaries of music and the practice of music composition. Their broad interpretation of concepts such as musical form, time perception, music notation, sound as metaphorical language, and their original use of sonic devices, span a wide spectrum of artistic medium involving symphonic works, chamber acoustic composition, performance art, visual arts, computer interaction, electro-acoustic music, opera, film, instrument building, three dimensional installation and live improvisation. Galindo’s work has been performed and shown at major music festivals, concert halls, museums and art exhibits throughout the United States, Latin America, Europe, and Asia, and has been featured on CNN, NPR, the BBC, the New York Times and The Nation, among many others. Galindo’s present work focuses on bringing attention to humanitarian and socio-political issues.