This online event is free and open to the public. 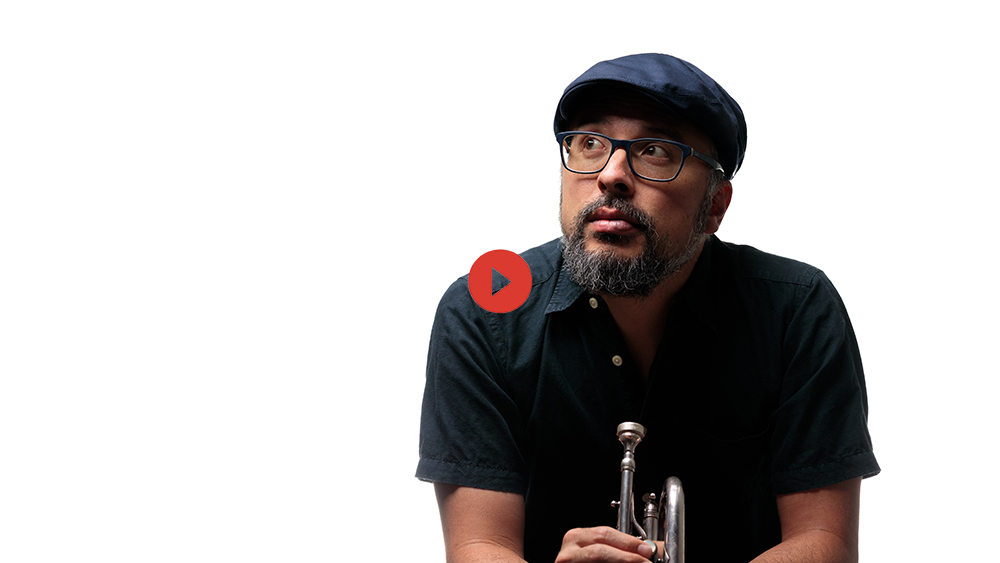 For his Songlines presentation, Bynum will share some recent examples of his music, small to big: solo cornet pieces accompanied by short films by choreographer Rachel Bernsen, and an oratorio for orchestra, jazz big band, choir and soloists entitled The Temp, with a libretto by poet Matthea Harvey, The work was recorded live in concert on February 22, 2020 – just weeks before the pandemic shutdown – with a 65-member ensemble combining The Coast Jazz Orchestra under Bynum’s direction and The Dartmouth Symphony Orchestra conducted by Filippo Ciabatti, with an exceptional group of guest soloists: vocalists Kyoko Kitamura and Michael Mayo, saxophonist Jim Hobbs, trombonist Bill Lowe, drummer Tomas Fujiwara, and violinist Erica Dicker. Bynum will discuss his process and priorities in his music, and Q&A with the audience after sharing video of the performances.

Taylor Ho Bynum has spent his career navigating the intersections between structure and improvisation – through musical composition, performance and interdisciplinary collaboration, and through production, organizing, teaching, writing and advocacy. Bynum’s expressionistic playing on cornet and his expansive vision as composer have garnered him critical attention on over twenty recordings as a bandleader and dozens more as a sideman, including his 2019 release The Ambiguity Manifesto, celebrated as one of the top releases of the year in the NPR Jazz Critics Poll. His varied endeavors include leading his own bands (such as his long-running Sextet and his 15-piece creative orchestra The PlusTet), his Acoustic Bicycle Tours (where he traveled to concerts solely by bike across thousands of miles) and his stewardship of Anthony Braxton’s Tri-Centric Foundation (which he served as executive director from 2010-2018, producing and performing on many major Braxton projects, including two operas and multiple festivals). Bynum has worked with other legendary figures such as Bill Dixon and Cecil Taylor and maintains current collaborative projects with Tomas Fujiwara, Mary Halvorson, Kyoko Kitamura, Joe Morris, and Tomeka Reid, among others, with other recent sideman credits including Nels Cline, Ensemble Musikfabrik, Jason Kao Hwang, Ingrid Laubrock, Nicole Mitchell, Wadada Leo Smith and Yo La Tengo. Bynum travels the globe to conduct explorations of new creative orchestra music, with works premiered by the Scottish BBC Symphony Orchestra and the Tri-Centric Orchestra, and has taught workshops at universities and festivals worldwide. He currently leads the Coast Jazz Orchestra at Dartmouth College, where he also teaches composition, improvisation and music history. Bynum’s writing has been published in the New Yorker, Point of Departure and Sound American, and he has served as a panelist, board member and consultant for leading arts organizations and individual artists.

More information on the Songline Series.