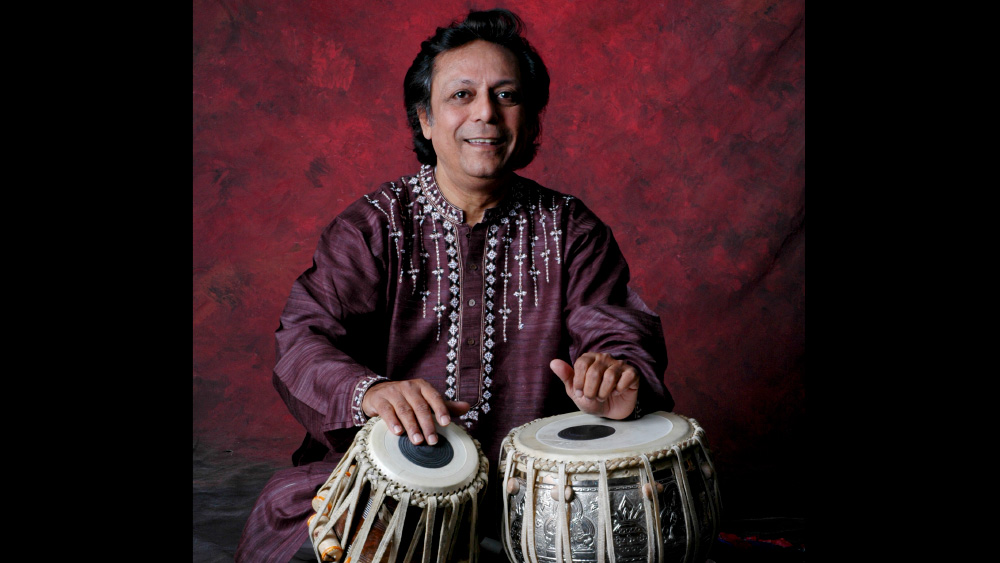 Please join a Question and Answer with Swapan Chaudhuri, moderated by Mills College Professor of Music Nalini Ghuman, from 8:00 to 8:30 PM PDT.

Pandit Swapan Chaudhuri is a phenomenon in the arena of Indian Classical Music. Musicians honor him as one of the most respected Tabla players, worthy of highest regard all over the world. Today a two time Grammy nominee, it was Swapan’s beloved parents, through their own passion for music, who initiated his formal musical training and inspired him in the field of Tabla, paving the path that would eventually lead him to virtuosity.

Swapanji holds a pedigree of awards and accolades reserved for artists of only the highest caliber. He is a recipient of the prestigious Padma Shree Award and Sangeet Natak Academy Award from the Government of India, as well as the American Academy of Artists Award, accolades which are reserved only for those artists who have attained the highest level of artistry. He is also the recent recipient of a Doctorate of Letters from Rabindra Bharathi University in Kolkata, India. Swapanji has received the Excellence in Performing Arts Award from the Global Indian Congress in San Francisco, and has been nominated into the esteemed International Percussive Arts Society's Hall of Fame. In 2016, and again in 2019, Swapanji was awarded the Master/Apprentice Award from the Alliance for California Traditional Arts.

Swapan Chaudhuri started learning Tabla at the age of five. He bases his style on the intensive training he received from his Guru, the late Pandit Santosh Krishna Biswas of Kolkata, an eminent exponent of the Lucknow Gharana. He holds a Master’s Degree in Music and has been conferred honors for his distinguished contributions in the field of Tabla by various academic and musical institutions. In addition to academic degrees in music, Swapanji also holds a Master’s Degree in Economics from Jadavpur University, Kolkata.

Pandit Swapan Chaudhuri’s music is the spontaneous expression of his powerful emotions and his deep knowledge of Tabla. His ingenuity has ushered in a purely new style of Tabla playing. It is undoubtedly through his clarity and elegance of performance, both as an accompanist and as a soloist, that he has achieved such notoriety throughout the world as a true master of Tabla.

As a soloist and accompanist Swapanji has traveled throughout Europe, North and South America, and Asia accompanying Maestros such as Ustad Ali Akbar Khan, Pandit Ravi Shankar, Ustad Vilayat Khan, the late Pandit Nikhil Banerjee, Ustad Amir Khan, Ustad Amjad Ali Khan, Pandit Bhimsen Joshi, Pandit Jasraj, Dr. Balamurali Krishna, Pandit Birju Maharaj, Dr. L. Subramanium, and Pandit V.G. Jog as well as other eminent artists. His concert career has taken him to the most prestigious stages in the world including Carnegie Hall, the Kennedy Center, Queen Elizabeth Hall, and the United Nations. In addition, he has produced numerous recordings, including his own Tabla solos and videotapes, and has appeared extensively on television and radio. Two records, Legacy (1997) and Passing on the Tradition (1998), were nominated for Grammy Awards, on which Swapanji collaborated with Asha Bhosle and Ustad Ali Akbar Khan.

As a composer, Swapanji has been creating scores for tabla and world percussion ensembles since the mid-1970’s, starting with his own tabla ensemble in Kolkata, as well as tabla ensembles at the California Institute of the Arts and the Ali Akbar College of Music. He has also been commissioned to compose for the Toronto Tabla Ensemble, Hands On’semble, Tabla Rasa, and the San Francisco World Music Festival. His dozens of compositions have gone beyond the sphere of pure percussion to include North Indian vocal taranas and compositions for marimba, influenced by trends in 20th and 21st century Western contemporary music.

Swapanji’s music reaches beyond the scope of Classical music to include performances and recordings with musicians such as Stevie Wonder, L. Shankar, Mark O’Connor, John Handy, Larry Coryell, John Santos, the reputed Persian musicians Alizade and Kayhan Kalhor, the African drum master, Malonga, and the renowned guitarists, Vlatko Stefanovski and Miroslav Tadic. He has participated in many International Music Festivals such as Bath, Perth, Sydney, Tokyo, Toronto, San Francisco, Kuala Lampur, Stuttgart and Berlin. His solo and accompaniment concerts as well performances of his compositions for percussion ensembles have received tremendous appreciation from Western and Indian audiences alike. He is associated with various American and European Universities as a visiting professor.

Since 1981, Swapan Chaudhuri has held the position of Director of Percussion at the Ali Akbar College of Music in San Rafael, California and in Basel, Switzerland, where students from all over the world have received intensive training in Tabla. Since 1991, Swapanji has been the Director of North Indian Percussion Studies at California Institute of the Arts, in Los Angeles, where he has also served as the Department Chairperson Emeritus for the World Music Department. Swapanji has taught and mentored hundreds of students who have had prominent careers as professors, performers, and teachers around the world. With his guidance, his students have become Fulbright Scholars, American Institute of Indian Studies Fellows, and professors at M.I.T., California Institute of the Arts, California State University, Sacramento, and other universities, as well as founders of their own schools in Los Angeles, San Jose, Phoenix, and Toronto, Canada. Recently, he has become a trusted advisor and mentor to the faculty, staff, and students of the newly formed Chitresh Das Institute, and serves as Artistic Director of Ashavari Performing Arts, and President of Rupak School of World Percussion. Through all of these activities, his influence and care for spreading his culture extends forward into many generations. Despite his demanding teaching responsibilities, Swapanji maintains a rigorous touring and recording schedule throughout the year. He resides in San Rafael, California with his wife, and sons.